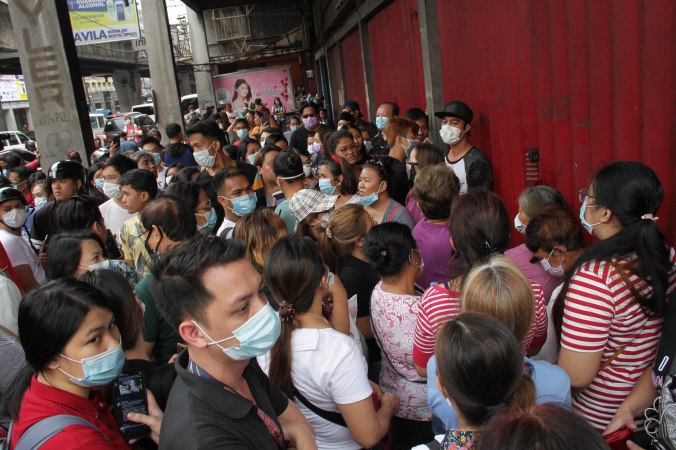 [ thanks and acknowledgment for the photo to Philippine Canadian Inquirer, maraming Salamat po! ]

THERE’S A short, one-sentence version of this, if you really have no time to proceed further, just read the following kabayan and / or friend : what if, being an essential worker during the virus pandemic, you become part of the problem? For a few hours last shift, this is what I contemplated, with both near- and far-reaching consequences.

[ Where I work now in New Zealand, “essential worker” means a worker working in an industry that the rest of the country cannot do without, meaning society couldn’t continue to function if the industry stopped functioning, for example the medical professions, telecommunications and the IT industries, police and emergency, etc. ]

At work, it all started with the hot flashes night before last. I know menopause happens with the fairer gender. But because I’m in that certain age, maybe even men aren’t spared. More than hot flashes, it was like “throbbing” in the head, chest and joints. That was when my imagination started going into overtime.

Complicating things a bit was lack of sleep the previous night, and a bit too much coffee. I was betting that these factors contributed to sore joints and a bit of tightness in the chest.

But of course you ask, Precious Reader: what if it was something else? What if it was the scourge of our generation, the plague claiming the health of more than a million across the globe and abruptly choking (literally) the lives of nearly a fifth of that massive number?

I was doing my regular and routine chores, but admittedly I couldn’t concentrate. I was on cruise control, relying on muscle memory, where my arms and limbs, coordinated by my senses, were just going through the motions and doing things they were so used to doing the last five years or so. But inside my mind was in turmoil.

Immediate thoughts were frivolous, in view of the stakes involved, namely my health and my life. my job was in an essential business and industry, and I thought of how my need to stop work would affect everyone else. more than my absence, everyone around me would have to pause from working too and get tested. What a horrific thought that was, and just then I realized something scarier.

Being over 40, I was already in a risk group. people my age were more than 10 times likelier to become a casualty in the life-or-death war of the virus against mankind. This fact alone caused me to think things through one week, one month and one year ahead from the present time.

One week ahead: would I be bedridden in a strange hospital bed, cut off from loved ones and the rest of the world? Every breath a labored chore, every move a painful challenge?

One month ahead: would I be saying goodbye and considering my exit strategy from work, social connections, life itself? Would my mind be filled with a balance of fulfillment and regret, knowing that my actions of only a few weeks ago were the last, defining moments of an OFW far from home?

One year ahead: would I just be a distant memory, one nameless statistic among the hundreds of thousands in the war against a virus that had ravaged our modern times?

Back to the present : I knew there was an easy way to erase my doubts and resolve my wild imaginings.

A thermometer gun nearby was used to detect early signs of overheating from our factory machines, but it would serve the purpose of removing my uneasiness. Without a moment’s hesitation, I pointed the gun on my wrist.

For now, all the crazy thoughts that had consumed me were momentarily lifted.

But maybe they weren’t so crazy after all. In this uncertain world, it’s good to be praning.