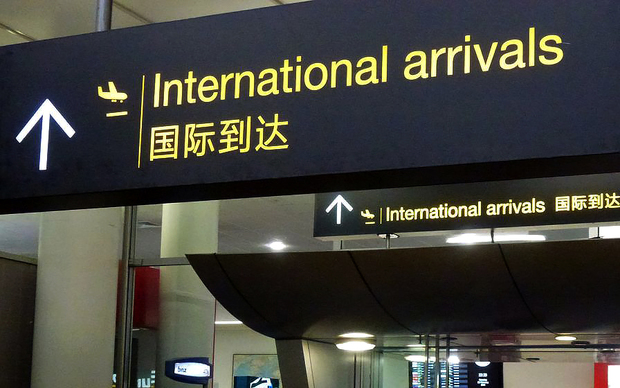 thanks and acknowledgment for the photo to radionz.co.nz!

[ Note :  Sorry to break this long hiatus with a less-than-positive post, but you get your blog ideas where you can.  happy birthdays to Frank Lloyd Gonzaga, Rhoneil Fajardo, Bok Labastilla, Butch Dado and Louie Angelo Fortuno! ]

I’M ALWAYS happy when a kabayan, either one visiting from the Auckland site or a work contractor from nearby, is in our worksite.  The other morning I saw a youngish, unmistakably kayumanggi (naturally tanned) face assisting the in-house engineer on an assembly of spouts being installed, and before I could ask, one of the electricians shouted, here’s a countryman of yours, and everybody else chattered about [groan] having another Asian to worry about on the site, a recurring joke among the regulars.

In my usual friendly and not-a-care-in-the-world manner, I dropped all my work stuff and approached the work gang, gestured to the dark-skinned brother and said, Pinoy ka nga ba kabayan, to which he answered in head-scratching manner, I’m only half-Filipino sorry, and mumbled something about leaving the Philippines when he was very young, which I countered with a half-apologetic, half-confused look that most Pinoys give when an assumption they make about people they think are compatriots are proven wrong.

Morning tea I shared a coffee with hilaw na Pinoy’s (half-formed Filipino’s) boss, the principal contractor (PC), and told him he had a Pinoy worker who wasn’t what he initially seemed.  Principal Contractor scoffed at what I said, saying that he was as Pinoy as bagoong and patis, because the worker’s Kiwi dad was only his stepdad, no blood relation.  As to leaving our homeland when he was very young, PC asked me : “Noel, if you left the Philippines when you were 14, would you forget your own language 6 years later at 20?”  Leaving that question unanswered, I wound up scratching my head twice that day.

And have I told you about one of Mahal’s newest friends (NF), a former co-worker who’s since left her job but has continued to visit us at home (we’re also neighbors) at least thrice a week, always finding a reason to visit us, not bad company but sometimes making at least one of us wonder, doesn’t she have things to do at home?

Mahal later found out that NF feels a special kinship to Filipinos, not only because she has a Filipino boyfriend (she herself is from one of the countries that, like ours, is being bullied by China in the South China Sea), but because she is not that comfortable with her own people.  If she had a choice, she would rather work or spend time with other Asians, not necessarily Filipinos, as long as they share common interests, are in roughly the same age brackets, and don’t have the same passport issuer.  Odd, but true.

The common denominator, of course, in these pair of anecdotes, is that there’s a slight awkwardness when the individuals concerned are asked about things strongly identified with their countries, i.e., language, countrymen, cuisine, and the like.  Specifically, I got the impression in both cases (although not so pronounced in the first case) that, because of one reason or another, some people would rather not associate with people of their country, regardless of the consequences.

You and I know what these consequences are, right?  Well, I can think of a few.  Kabayan will think you’re mayabang (aloof), anti-social, or worse, you’ve got something to hide.  In fact, here are a few reasons, valid or not, that I think some kabayan behave this way :

You’re hiding something from the past.  The romantic notion of migration, which I happen to like, is that no matter what you did back home, no matter what mistakes (but not crimes) you committed, you start fresh on these shores.  A clean slate, so to speak.  Here, no one knows about the skeletons in your closet, and if anyone did, who would know that they’re yours?  This is why migration is so appealing for those who want to start anew, forget the past, and forget hurts associated with said past.

Unfortunately not all of our kabayan think this way.  Because they think there are people who still give a damn or even remember what happened 10 years ago (I can’t even remember what I had for merienda last Friday), they avoid Filipinos at all costs, attend Mass where there are very few Pinoys, if they attend Mass at all, and go to the Asian and Filipino stores as seldom as possible, buying as much as they can on the odd visit.  Sounds unPinoy, and anti-social, but believe me bro/sis, there are people like this.

Why this doesn’t work :  Like we said earlier, migration is the chance to start anew, start fresh, blah blah blah, and even then, if you bring baggage from your home province, as long as it doesn’t scandalize anyone or bother anyone else, believe me when I say no one cares.  Don’t worry about your image, kabayan.  Like everyone else, you are welcome.

You know that most of your kabayan got here on the strength of their work experience, academic credentials, and other kinds of cleverness.  You know that these kinds of topics inevitably come up in all kinds of discussions and you just can’t keep fudging the details.  Better that you just keep to yourself, the less said the better.

Why this doesn’t work.  I’ll tell you a little secret kabayan.  SURE it’ll be a little uncomfortable telling other kabayan about your personal circumstances.  SURE there’ll be some awkwardness when you compare notes about how you got here.  And SURE your personal story might be a little different from the next guy/gal.  But you know what?  No one has a perfect story as to how they got here.  No one has an immaculate, spotless record when it comes to the adventure of getting to New Zealand.  Otherwise, there would be no need to be a migrant and look for greener pastures.  If there was nothing wrong with each of our individual stories, none of us would need to ever leave our Inang Bayan.  And that is why, betting my last 500 Ninoy-note (that I’ve been saving in my dog-eared wallet for my next visit home), if you tell me your awkward little tale, Maalala Mo Kaya style, I won’t even bat an eyelash…

You think you’re better than other kabayan.  to be brutally honest kabayan, there are Pinoys like this.  Just because they left a great, cushy job back home, just because they think they have to sacrifice their creature comforts and “civilized” social amenities, just because they managed hundreds of staff back home, they are somehow “above” all the working classes of New Zealanders, some of whom happen to be the very Pinoys they lorded it over back home.

Truth to tell, kabayan, this type of Pinoys admittedly did have it great back home.  They very nearly lived like royalty in the Philippines, what with assistants, junior associates, interns, house servants, servile spouses making up their world, doing everything for them, and at their beck and call.  Because of force of circumstance, the urgent need for a change of pace, financial setbacks and similar stuff, these same kabayan have had to migrate, to a world where 90% of your daily lives, you do everything for yourself.  A shocking change of lifestyle, but true.

But habits are hard to change, and the kabayan in this last category think they shouldn’t even be doing the things they’re now forced to do, work with the people they used to step all over, and endure the indignities of driving your own car, doing your own laundry, and (God forbid) washing your own dishes.  Hard to believe, but they make up for this by avoiding their kabayan totally, hardly going out of the house except to work, do the groceries, and make pasyalan (enjoy outdoors) with only their equals or, as a last resort, family.

Why this doesn’t work.  Sooner or later we all discover that because we all eat the same rice, drink the same water, and go to the toilet to do the same things everyday, we are all the same.  Better than this, we are born naked and defenseless, and we meet our Maker in exactly the same way.  Some of us Pinoys, sadly don’t discover this until late in life, or amusingly enough, when they are furthest from home, in a strange country, and doing what everyone else is doing, namely working for your daily bread (or rice).

The sooner we all discover this, kabayan, the better.