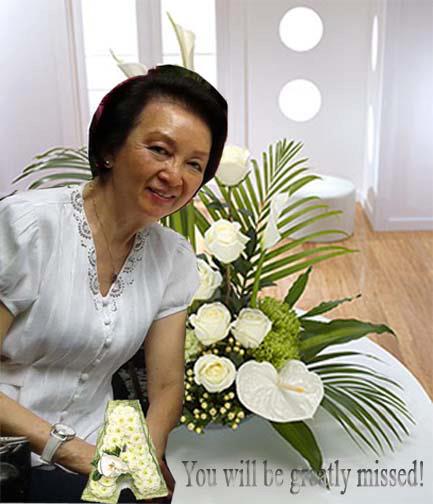 TITA (aunt) AMY Sy became fast friends with our Tita Lily relatively late in life, but that didn’t stop her from being a beloved member of the family.  Originally part of their Saturday mahjongg games, Tita Amy became a regular in family events, religious gatherings and anytime something was celebrated or commemorated.

What most of us in the family didn’t realize was that Tita Amy was a devoted member of her own church for many many years, and had been a well-loved and regarded Tita of everyone, who helped with both the physical and spiritual well-being of anyone who might be in need.

Before I left the Philippines to try my luck overseas, Tita Amy would always ask me how are your children?  Are you alright?  Are you taking care of yourself?  I never stopped wondering how a woman who was usually alone to care for herself (her husband had passed away years back and both her daughters migrated to the US) could care so much about others.

After I left our homeland, Tita Amy often saw Ganda and Bunso and asked about their goings-on, if they had any pressing issues and gave unsolicited advice the way grandmothers do.  Together with her good friend Tita Lily they watched diligently over dozens and dozens of nephews, nieces, grandnephews and grandnieces as if they were their own children.  Without much fanfare she had endeared herself to many of the sons and daughters of the next three generations, long after she was gone.

And indeed last Friday Tita Amy joined our Creator after a short bout with serious illness, the shortness matched only by its sadness, as Tita Amy as always looked like she was in the pink of health.

You many no longer be with us but your spirit lives on in the hearts and minds of those you left behind, and we thank you for the gift of love and life.

One thought on “goodbye Tita Amy !”