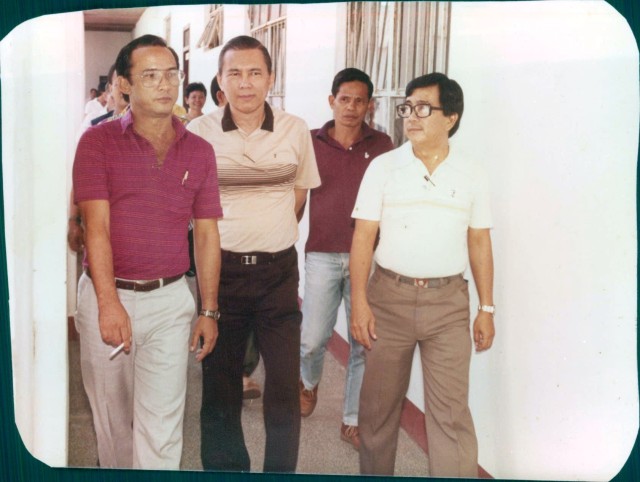 LOOKING BACK TO THE bad old days of Martial Law in the Philippines, I realized that your bravery, steely courage or just plain blindness to danger could be measured by when you stood up to the authoritarian regime.

Towards the end of the conjugal dictatorship, post-1983, it became fashionable to rise up against the dying Marcos dynasty.  But before that, you just learned to watch your step and hold your tongue everytime you found something to do or say against the government.

Not so during the first few years of Martial Law, when the President and his tight circle of enablers from the military and legal elites held absolute power over the archipelago.  Anyone who dared to express disagreement, legally or otherwise, was considered not in his right mind, and only the hardiest of freedom fighters and libertarians were courageous enough to stick their head out and tell Mr Marcos that the Emperor had no clothes.   At risk to life and limb.

One of these brave few warriors was Mr Napoleon V Dilag, whose name (together with his co-petitioners) appears as petitioner in one of the most famous cases in Philippine constitutional law, Javellana vs Executive Secretary, and should rightfully be considered part of legal history.  Together with his lawyer brethren, they successfully presented arguments to show that the leadership, via political sleight-of-hand, legalized an unratified Philippine Constitution and by virtue of such legalized a then-unheard of third term for the incumbent President.  If not for a slim majority of one or two votes in the Supreme Court, history might’ve been vastly different, but that the case reached the Supreme Court at all we owe to people like Atty Dilag.

After the so-called ratification cases (ratifying Martial Law declaration) were disposed of by the Marcos Supreme Court, Atty Dilag, like many of our country’s citizens, went about their business while keeping a long, vigilant watch over the country.  For most of the next two decades, Atty Dilag was also Barangay Capt Dilag, and was ward leader over one of the most populated barangays in Paco, Manila.  It was also the best time for him to look inward, becoming a hands-on husband, father, grandfather and everything else to his impressively sized family.

Towards the middle 1990s Barangay Captain Dilag was appointed The Honorable Judge N Dilag of the Cavite Regional Trial Court, where he now seized on the chance to apply and interpret his passion, The Law, from the other side of the bench.  Practicing lawyers seem to have the greatest aptitude for a vocation of this sort, and Judge Dilag was no exception.

But the thing that linked the professional and the personal aspects of his life was the passion that he lent to whatever it was that needed his boundless heart or giant intellect.  Whether it was disposing of the myriad aspects of a twenty-year old property case, filing a habeas corpus petition on behalf of a political prisoner, singing a lullaby to his youngest grandson, or remembering to greet happy birthday, in person or by phone, each of his eight children in the Philippines, Australia, USA or Canada, Judge Dilag never held back an ounce of effort or gesture of love.

Judge Napoleon V Dilag passed on to that great courtroom in the sky last December 14th after a lingering illness.  His great legacy of commitment to work, family and country will live on in all of us whose lives he touched.